The power of dust, sandblasting. 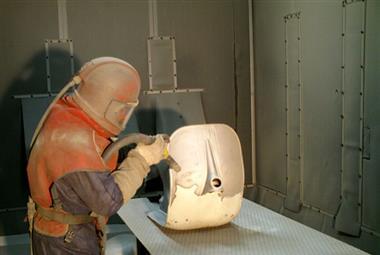 Sandblasting is a process by which the exterior or surface portion of a material is eroded via an abrasion generated by a jet of sand and air.

Sandblasting is mainly used for the surface treatment of metals.

In the field of mechanical engineering, sandblasting is typically carried out as an intermediate production process, and is only rarely performed as a final operation.

At the end of the operation, the material underlying the removed layer is completely revealed and its roughness depends upon the sandblasting pressure and the size of grit utilized, but is nevertheless quite accentuated when compared to the typical values obtained via mechanical processing.

Sandblasting is therefore one of the preferred procedures for preparing workpieces to be painted.

Sandblasting is typically carried out upon steel, cast iron and metal alloys in general, but is also performed upon other materials, including wood, ceramics, stone and marble, whether for industrial, mechanical or construction use.

The dedusting system's safe and continuous functionality is an indispensable condition for constant production. Offering both safe and effect...

Depending on the product, the dust concentration, the air humidity, and the size and shape of the particles, explosion hazards can arise unde...

The dedusting system's safe and continuous functionality is an indispensable condition for constant production. Offering both safe and effect...

next
en
Warning
Confirm Submission
All the fields are mandatory!
Incorrect Email address format!
You must consent to the handling of your personal data!